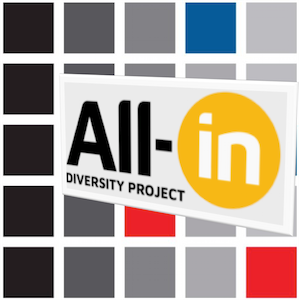 Las Vegas based technology company Scientific Games announced that it has officially partnered with the All-in Diversity Project. The firm is stated as being a founding member, adding to the long list of partnerships for the mega-corporation. But this partnership is a little different from others recently announced. The All-in Diversity Project is a non-profit endeavour aiming to ensure that the technology industry is one that is populated by workplace equality, diversity and inclusion.

But Scientific Games won’t be going at it alone if things pan out as is hoped. They plan to work with additional partners, presumably other tech companies, in order to further the reach and impact of the project. But before All-in is even off the ground, first steps will be taken to determine diversity expectations in the gaming industry as a whole. After these factors are decided, hopes are that a global standard will be established and maintained.

Gaming Is Evolving And Growing

Speaking on behalf of Scientific Games, Katharine Anderson, director of diversity and inclusion, made a statement about the partnership. She said that that the company was proud to be involved in what she referred to as a “trailblazing endeavour”. She went on to declare that the gaming industry was growing and expanding at a rapid pace, and that work environments being diverse was essential. That opportunities be inclusive for all unique people that contribute to the gaming world, she concluded, was the purpose of All-in.

It was also made clear that the founding firm would enter into regular dialogues with all other members of the initiative, which would help keep track of progress in the global industry and ensure that no blind spots were overlooked. Overall, however, the main purpose of the initiative seems to be acting as a central data resource whereby all participating operators and suppliers may quickly and easily determine how to best ensure diversity in their own spaces.

Co-founder of the initiative, Kelly Kehn, made her own statement on the partnership. She expressed delight at how things were unfolding and heaped praise on Scientific Games for deciding to be involved. In her own words, she declared that it was outstanding to see a gaming organisation that did not just talk the talk, but went out of its way to walk the walk. In other words; that the partnership would result in tangible action being taken was far better than simply providing lip service to the challenges of all inclusive work environments. Kehn went on to say that she felt the groundbreaking work being done applied not just to the gaming sector of business, but also to all sectors across the world.

It is yet to be seen which other powerhouse technology companies step in to add to the partnership, but hopes are that the biggest players will likewise decide to partner, and add true power to what appears to be a bold step in the right direction. More will surely be heard about this story as it unfolds, and bigger steps are taken to create true workplace inclusion and equal opportunity.