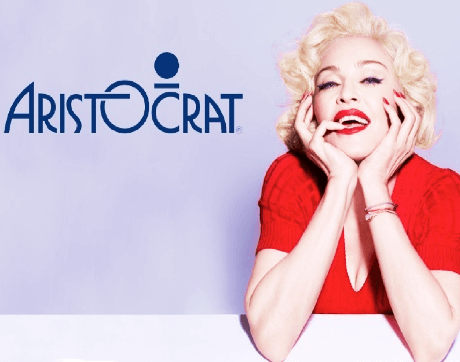 Madonna has been immortalised as an icon of 1980’s style, fashion and music – and not much has changed over the past 40 years! Now, to celebrate one of 80’s pop culture’s most beloved icons, pokies developer Aristocrat Technologies has acquired the exclusive rights to create a game based on Madonna’s very own personal brand.

The newly signed deal will allow Aristocrat to create multiple branded pokies games, and the developer is expected to reveal its very first Madonna pokie at this year’s Global Gaming Expo at Las Vegas this coming October.

The timing of this pokies game’s release is perfect, as Madonna hit the Hot 100 charts with her hit single Holiday in the week of October 29, all the way back in 1983. Now, 34 years later, the singer’s fame is being encapsulated in a funky modern pokie that will no doubt please Madge’s devoted fans in Australia and New Zealand alike.

Slots to Feature Unique Game Play Based On Madge

Madonna is a Grammy Award-winning musician who has even been inducted into the Rock and Roll Hall of Fame for her invaluable contributions to the world of music. She has earned 57 chart hits during her career, including a record-breaking 38 Top 10 singles. Furthermore, Madge even holds the honour of being the highest-grossing female artist in Billboard Boxscore’s history.

Aristocrat’s Managing Director of the Americas, Matt Wilson, commented that Aristocrat pursues only the best and most legendary brands in order to create its branded pokies, which help its operators to provide their players with the best and most engaging entertainment possible.

Madonna is certainly one of the biggest names in pop, he noted, saying that the developer is thrilled to be able to welcome the singer’s brand into its own family of licensed content. The Madonna pokies game and each branded pokie that follows will boast its own unique features and game play, all inspired by the star’s hit songs.

Madonna Pokie To Be Featured At G2E Booth #1141

Chief Product Officer of Aristocrat Rich Schneider also commented, noting that his company has been working for months to create a Madonna pokies game that encapsulates the essence of the singer’s brand, while also bringing excitement to players.

The new pokies, he said, will be fuelled by Madonna’s groundbreaking pop music, featuring thrilling game play and more. According to the CPO, the new Madonna pokie from Aristocrat will be featured at booth #1141 at the Global Gaming Expo coming up next month.