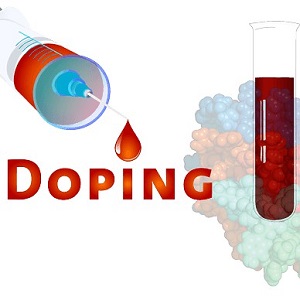 There were a lot of glorious moments at the 2018 Winter Olympics. North and South Korea walked into the opening ceremony together, Mirai Nagasu made history as the first American woman to land a triple axel at an Olympic event, and Chloe Kim tweeted in a relatable way about junk food before she won a gold medal.

There were several talking points too, with Jocelyne Larocque refusing to wear the silver medal she was given after the Canadian women’s hockey team lost to Team USA, and people coming out strongly for or against her on social media platforms. One cast an especially long shadow; the doping case of Aleksandr Krushelnitckii.

After the Russian tested positive for Meldonium, a substance that has been banned by the World Anti-Doping Agency since 2016, he and his wife Anastasia Bryzgalova had to return the bronze medals they received for the Doubles Curling event. The shock of doping occurring in a sport known for camaraderie and not widely perceived to be as physically demanding as others is underlining how widespread the use of performance-enhancing drugs is.

In addition, though Krushelnitckii denies purposefully using a banned substance, the event has rocked Russia’s attempts to rehabilitate its image amid years of doping scandals and the debacle of state-backed cheating schemes at the Sochi Olympic games in 2014. With so many issues being raised, this incident will probably be discussed for a considerable time.

Among the biggest questions for sports bettors, of course, is what happens to their wins if they backed the disgraced pair. If you put money on Krushelnitckii and Bryzgalova winning at an online betting site, what is going to happen to your payout now? And in the broader sense, what happens in these cases in general? What has been the situation in other doping cases, and what about other instances where the results are deemed invalid, such as when match fixing is exposed? We’ve got the answers for you.

You Won’t Need to Return Your Win

We’ll start with the good news; you won’t have to pay back whatever your bet return was if the results are deemed invalid after the fact. Bookmakers pay out according to the official result, with disciplinary hearings, disqualifications and other such actions not usually having any effect. If an official result is not given immediately and is subject to review or appeal you won’t get paid out until this has happened, but then the same rules apply.

Unfortunately, this system also means that if you backed the contender or team that should have won you won’t be paid out once the records have been adjusted. There is, however, a little more evidence of bookmakers’ decency and generosity; often they return losing bets in these cases. This is what happened in April 2013, when Ladbrokes and William Hill refunded thousands and thousands in wagers after a doping scandal involving 11 horses from Godolphin Stables rocked the sports betting world.

Horse Racing is Generally the Exception

The Godolphin doping case aside, horse races are often unclear because the horse that is first past the post is not the same as the official winner as determined after the weigh-in. Once again, though, bookies are on your side with this and usually pay out according to first past the post and weigh-in results.

If the outcomes are different due to something like a penalty for interference, or anything else, you are still paid out as a winner when you’re betting at a reputable land-based or online bookie. This is just one more reason to make sure that any bookmaker you choose is properly licensed, regulated and above-board.

You Can Query Payouts or Results

While in general you’ll just have to accept your loss if the contestants you backed are ultimately deemed the winners following an official results review, you can try to take recourse. Since you never know what the outcome will be, there’s no harm in asking and finding out.

All sports have their own rules about what happens to wagers if an event is forfeited, for example, as well as special circumstances in which the general rules do not apply. If you have any queries, contact the bookmaker. In cases where they have not yet paid back losing bets following a disqualification, this often prompts them to do so.

If the athletes you backed are ultimately deemed the winners you may not get the full payout that you would have if the results had been correct the first time, but having the bet that you made returned to you will mean that you don’t make a loss.

The most important thing here is not to become jaded over sports betting when doping, match-fixing and other scandals occur. The great establishment of punting on beloved games can withstand a few unsavoury individuals, as long as bettors stay enthusiastic and bookmakers stay decent.