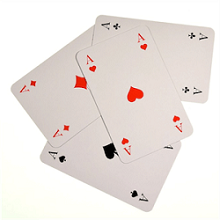 Former Crown Melbourne baccarat dealer, Michael Huo has been hauled in front of an Australian court for allegedly running in a casino scam. Crown Melbourne officials claim that they caught Huo and his three female accomplices – Yixuan Cui, Fiona Shum and Ke Wang – in the act of running the scam on the venue’s security cameras.

The court has heard that, in operating the scam in the casino’s Mahogany VIP Room between 26 March and 1 May, Huo and his accomplices robbed the casino of a whopping US$311 000. The four are now facing potential jail time on charges of acquiring property by deception, dealing with the proceeds of criminal activity, engaging in behaviour that corrupted a betting result.

How They Pulled It Off

The prosecution in the case alleges that the 35-year-old croupier and his co-conspirators are guilty of the aforementioned offences because Huo peaked at top cards before advising the others on how to play.

Although the Mahogany VIP Room’s customers were oblivious to this activity, the casino’s security camera’s managed to catch the culprits in the act. According to the Crown Melbourne’s lawyers, the cameras show how the offending players were able to defraud the casino of US$335 000 in only 58 hours. Security said they were able to spot at least 20 instances in which Huo glanced at the first few cards in a shoe before consulting with his accomplices.

When the casino security eventually picked up on the illicit activity recorded by the cameras on 1 May 2017, the four fraudsters were promptly arrested.

Slap on the Wrist for Wang

Unlike her three co-defendants, 25-year-old Ke Wang may be able to evade jail time owing to her age and the fact that she is a first-time offender. Instead, Wang’s punishment, if she is found guilty, will take the form of mandatory participation in a diversion programme. Huo, Cui and Shum, meanwhile, face the daunting prospect of up to 10 years in jail.

Case May Be Thrown Out

Whilst the prosecution feels that it has a solid case thanks to its video evidence, the defence argues that the case should be thrown out of court. The defence lawyers have offered up two reasons for this request.

Firstly, the defence claims that casino security was not legally entitled to arrest Huo and his accomplices. Secondly, they argue that the surveillance footage does not adequately depict how much was won legally versus how much was gained by game rigging. In support of this argument, the defence called Casino Investigation Manager, Jason McHutchison to the stand to explain the difference. According to the defence, McHutchison failed to adequately explain this difference.

Court proceedings are still underway, with their likely outcome still difficult to predict.