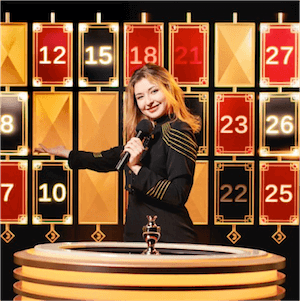 Live dealer casino specialist Evolution Gaming has revealed a brand new live Roulette game that offers a unique side bet boasting prizes of up to 500-1! The game, dubbed Lightning Roulette, is intended to amp up players’ gaming experiences with more variety and bigger wins when compared to traditional Roulette, not to mention an exciting new side bet for added action.

The side bet in Lightning Roulette consists of one to five randomly selected numbers upon which players can wager. Should these bets prove correct, players can claim a whopping 500 times their stakes as winnings, over and above their base game winnings from Roulette itself.

The new game has added plenty of other extras to the classic Roulette experience, too. Evolution has gone all out with lightning strike sound effects, booms of thunder, and other animation effects for a touch of drama with every spin of the wheel.

Up to 500x Electrified Winnings

According to Evolution CEO Todd Haushalter, the new Lightning Roulette title is the most complex game that his company has ever created for the online casino industry. However, he noted that much of the title’s complexity is out of players’ views, who only see that during each Roulette side bet, between one and five numbers are struck by lightning and their payouts magnified by between 50x and 500x their value.

The CEO explained that to do this, Evolution combined RNG generators with its Live Roulette wheel – something that has never been done in the iGaming industry. With that said, this isn’t the only industry-first for Evolution this year. The firm’s new Salon Privé offering for VIPs is also making waves in the online gaming world.

The new Salon Privé is intended to be the developer’s most luxurious offering, targeting the super-VIP market with an initial offering of Blackjack and Roulette. According to Haushalter, this concept has not been done before because it is very challenging from an operational perspective, but regardless, his company is now offering its VIP players unprecedented levels of control, privacy and luxury in single-player gaming tables.

According to the CEO, VIPs will be able to choose their favourite dealers, change the cards and the speed of their games, and control many more in-game features in the new offering. He noted that Evolution’s mission with the Salon Privé is to offer a ‘white glove’ gaming service akin to that which is offered in the salon privés of Las Vegas.