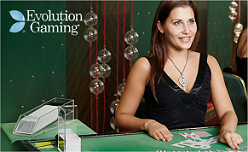 First came online casino games, then came mobile casino games. If Evolution Gaming’s Q3 2017 results are anything to go by, live dealer gaming is the next big thing.

According to the live dealer gaming operator’s results between July and September, it saw a 56 percent year-on-year increase, with profits for the period soaring to an impressive €45.7 million.

To put it in context, the same period last year saw the operator generate €29.2 million. Furthermore, Evolution Gaming’s EBITDA grew by more than 100 percent to reach €21.8 million, with the greatest spike having been achieved in Q3 this year.

This means that the operator’s year to date revenues grew by 57 percent year-on-year to reach €127.7 million. The operator said its phenomenal growth was due to market conditions being favourable.

The growth experienced by the operator is no doubt also due to the increasing popularity of live dealer casino games at online and mobile casinos as well as at land-based casinos.

The operator expects an even greater increase in end-user bets next year, due to the FIFA World Cup. It also appears that countries across Europe, as well as the USA and Canada, are looking to make online gambling legislation friendlier toward operators and players.

If such measures are brought into place, it could widen Evolution Gaming’s reach and lead to even further growth.

The Appeal of Live Dealer Games

Live dealer casino games such as those operated by Evolution Gaming are growing in popularity for a number of reasons. One of those reasons is that there are many players who still do not trust the random number generators used to produce the results of digital and mobile casino games.

Players can keep up with every second of the action via HD video streaming, and can communicate not only with the dealer, but with other players at the table, using an integrated live chat feature. This means players can enjoy a far more social form of gaming without the need to leave their homes.