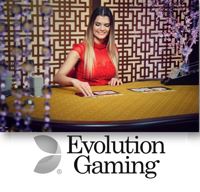 s one of the industry’s foremost live dealer game providers. With licenses in several prominent gaming jurisdictions and extensive certification, the developer has worked consistently in expanding its range of live dealer games since its establishment in 2006.

Recently, Evolution Gaming announced the release of yet another game to add to their 2016 portfolio. Baccarat Controlled Squeeze is the second Baccarat variant to be released by Evolution this year, following the Live Baccarat range that was launched previously.

In Live Baccarat Squeeze, the game’s dealer controls the squeeze entirely, but the new variation of the game allows players to take control of the squeeze, and thus have a much more prominent presence.

The new Baccarat games from Evolution Gaming have been optimised for both desktop and mobile devices, allowing Kiwi players with all manner of devices to get in on the action. The live games are streamed directly from a custom-made and designed, multi-HD capable camera table that operates from Evolution’s Riga studios.

The state of the art camera table contains glass panel inlays on the table top, as well as a single camera above the table and two additional cameras installed underneath it. As a game begins, the playing cards are dealt facing down on the table’s glass panels, and the cameras underneath the table broadcast a close-up view of the cards’ faces directly to the player’s screen.

Optical filters obscure the faces of the cards, and the game’s UI also offers a built-in overlay mask. In order to remove the mask and view the value of each card, players of Baccarat Controlled Squeeze will need to click or tap on the edge of the cards. The new game from Evolution also provides players with the chance to practice the Baccarat Squeeze without having to place a bet beforehand.

In a recent launch statement, Creative Director of Evolution Gaming Richard Hadida said that the ritual of the Baccarat Squeeze is an important part of the game for many players, especially those of VIP status and those who are looking for a lifelike gaming experience akin to a game of Baccarat in Macau.

He went on to say that the authentic replication of the squeeze in Live Dealer Baccarat has been effective thus far in attracting the attention of high-rolling Baccarat players. The latest squeeze variant in Baccarat Controlled Squeeze, Mr Hadida stated, will serve to extend players’ choice, and allow Evolution’s casinos to maximise their opportunities in the live online casino market.