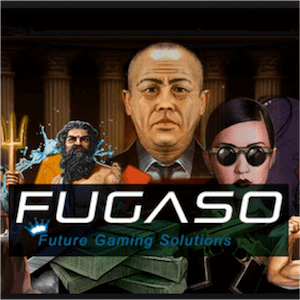 Groove, holding licences in Malta, the UK, and Curacao, is just about as big as it gets when talking stepping-stones into international regulated markets. Some of its existing partners include Merkur, BetSoft, Habanero, NYX, Play’n GO, and Evolution Gaming.

A right league of industry giants, so to speak.

Not Bad For A Bunch Of Newbies

FUGASO is relatively young, and was established as recently as 2016. This year’s ICE event was the developer’s first, and already the world’s biggest iGaming event has managed to shape the future of yet another talented team of iGaming software specialists.

As for the team, let it never be said that the lack of a sense of humour is one of its shortcomings. One of the highlights of its presentation at ICE was the very satirical Trump It Deluxe pokie. Arguably the most light-hearted depiction of the US President to date, the game offers much in the way of a social commentary on the global political landscape.

Let it also not be said that warnings of a laugh a minute and possibly some political upsets (depending on the beholder) were not issued beforehand. FUGASO revealed beforehand that a trio of new pokies would be on display at the expo, as well as having pre-released teaser information for each.

Its New And We Love It

Stoned Joker and Super Hamster joined Trump It Deluxe on the list of new releases. Stoned Joker does its bit in terms of tapping in on the global rise of marijuana, and Super Hamster tells the tale of an over-ambitious pet hamster and his dreams of becoming a space traveller and modern-day rocket hero.

Offbeat storylines aren’t always necessarily part of the typical iGaming deal, and so it’s refreshing to see that what we like to refer to as true content pioneers still do exist. Apparently it’s only a matter of knowing where to look!