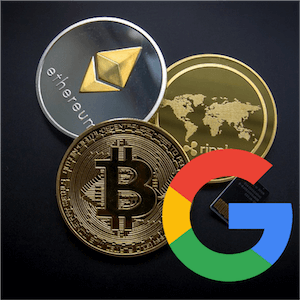 Internet giant Google is now clamping down on cryptocurrency advertising and all ads promoting ‘unregulated and speculative financial products’. Google’s own Director of Sustainable Ads, Scott Spencer, who announced the policy change in a blog post late last week, revealed the news.

The announcement has come just weeks after another Internet and social media behemoth, Facebook, confirmed that it would be blocking all cryptocurrency ads appearing on its networks. Google will soon be distributing its updated policies on advertising this June, which will reportedly include a strict ban on all ads related to cryptocurrencies, ICOs, cryptocurrency exchanges and wallets, and even trading advice.

Spencer also confirmed in his blog post that ads for unregulated and speculative offerings, like binary options, spread betting, difference contracts and foreign exchange markets, will be included in Google’s upcoming crackdown.

Scams More Prolific Than Ever

The technology firm has noted that its choice was spurred on by the increasing incidences of customers being victimised by online scams. Cryptocurrencies’ booming popularity has created the ideal conditions for scams and illicit schemes to gain a foothold, according to several major reports published over the past few years.

Google will also block ads for contracts for difference and spread betting, as mentioned above, which are known to be financial markets that allow individuals to wager on the value fluctuations of their assets. Such products have been heavily criticised of late due to their controversial and possibly risky natures, along with the many cases of users being scammed by the advertisers and operators of these products.

Spencer’s post also revealed that Google removed a whopping 3.2 billion ads from its network in 2017 alone. This is almost 100 ads per second, coming as an almost twofold increase over the previous year, in which an equally hefty 1.7 billion adverts that violated the firm’s policies were removed.

Google also reported in 2017 that over 17 million of the ads it removed the year before were those that were promoting gambling-related products and services, such as casino games. Spencer added in his post that Google has now updated its policies to include more recently emerged forms of gambling, such as skin gambling and the use of virtual goods for betting on the results of gambling games and professional sports matches.

The Google executive further highlighted that his company will introduce an improved certification process for rehabilitation centres soon. This will make it easier for such organisations to contact and approach those suffering with problem behaviours, including gambling addicts and those showing signs of problem gambling habits.