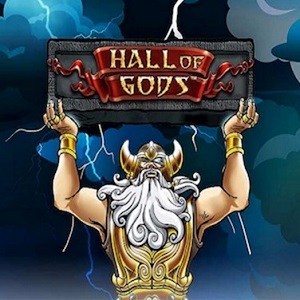 Yet another player has struck it lucky following a massive Jackpot won from NetEnt’s famous Hall of Gods online pokies game.

The news was announced this week by one of the best online casino NZ brands, Casumo, who confirmed that the lucky player had been from Finland and that the jackpot money came to a crazy total of €7,595,435. The popular progressive network jackpot pokie paid out big on July 21.

According to the popular online casino’s announcement, the lucky Fin struck gold less than 24 hour after opening a player account.

Hall of Gods is a stunning online pokies game based on Norse mythology.

The overall experience is an engaging one for players, complete with the sound of drums in the background and an invigorating musical spectacle each time a winning combination of symbols lands on the reels.

Ten different designs have been incorporated for the game’s symbols. This means five high-value and five lower-value icons – each embossed with a unique design featuring Norse gods and artefacts. The stunning graphics definitely add to the overall playability of the online pokie.

The bonus symbol is Thor’s famous hammer and is the key to unlocking a Pick-Me bonus round. The famous hammer features heavily all throughout the game and the bonus round, with players using Thor’s signature weapon for smashing open shields concealing instant cash prizes.

About Hall Of Gods Jackpots

When playing Hall of Gods, online pokies players get to look forward to landing any one of three Jackpots: Mini, Midi, and Mega.

The amounts accumulated in each Jackpot are at all times clearly displayed at the top of the game area. Players therefore always know what they’re playing for. These amounts are connected to the size of the wager played at any given time.

NetEnt’s Hall of Gods pokie can be played at the best online casino NZ sites on just about any platform. The game’s software is compatible with all major desktop and mobile operating systems, making it accessible to everyone.

The latest big NetEnt win isn’t the first for Casumo. Since the game’s launch back in 2012, more than an incredible 10 Mega Jackpots have been won by the online casino’s players.

Spin the reels to WIN! Play the most rewarding pokies ONLINE.