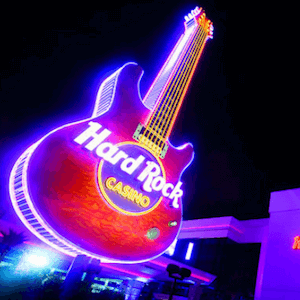 Hard Rock Japan, a division of the world-famous Hard Rock International group, has made known the details of its plans for the development of a resort in Japan, in the event that its proposal is accepted as a successful bid once the country opens up the bidding process for the three available Integrated Resort (IR) licences. Japan only very recently finalised legislation that makes provision for the establishment of three casino and entertainment resorts within the country’s borders.

Strict regulations will apply to the gambling aspect of business at the resorts. For example, the casino division of a typical Integrated Resort will not be permitted to occupy more than 3% of the total resort-area. Despite a long list of rules and regulations, operators are literally queuing in the proverbial corridors for the opportunity to bid.

A Hotel In The Shape Of A Guitar

Hard Rock Japan is hoping to be granted one of the three licences, and plan on opening an IR in the city of Tomakomai on the island of Hokkaido. An Integrated Resort showcase was hosted by the city during last week, and there, CEO and Chairman Jim Allen, revealed some of the company’s grand plans for the construction of a world-class entertainment resort.

One of the unique features of the resort will be that it will feature a guitar-shaped hotel, in true Hard Rock style. A Four Seasons resort and Broadway-style theatres will also form part of the Integrated Resort, once completed. The details about the property’s casino are yet to be released by the group, and will in all likelihood remain a closely guarded secret as far as what members of the general public are concerned, at least until such time as the bidding process has been finalised.

But the group won’t be going it alone. Allen also revealed details about the partners that will be joining the Hard Rock group in Japan. An existing partnership between Hard Rock International and the New York Yankees had been extended exclusively with the aim of bringing the entire NYY experience to the country, in mind.

The resort will also feature cultural elements of the indigenous Ainu people in an attempt to raise awareness about their heritage.