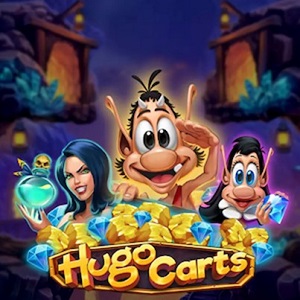 Creating the Hugo Carts experience is a combination of special bonus features and fast-paced gameplay for that unique and alluring online gaming experience. Play’n GO’s Hugo Carts is part of the Hugo troll mascot series of online pokies games, and it fully lives up to the quality of the exceptional series of iGaming content.

The latest big release by Play’n GO is played on 5x4 reels and has a whopping 1024 Ways to Win.

While Hugo Carts remains part of the Hugo series, it’s an online pokie with a distinct difference. Designed to entertain and thrill, the game features a special Re-Spin feature that creates the notion of the different characters chasing one another on the game’s reels. This creates action and engagement.

An addition bound to become popular at the best online casino NZ sites is the Dynamic Pay-Ways mechanic. While set at a starting tally of 1024 Ways to Win, the game will create even more ways to win by splitting the existing paylines as the game progresses. This is achieved by the presence of special Multipliers.

Re-spins feature all the time, with each character (or even a combination of characters!) triggering a different bonus game:

Hugo: Landing on reel 3 during the basegame, Hugo will drop between two and five Golden Nugget Wilds onto the reels.

Hugolina: Appearing on reel 2, Hugolina will during the basegame add between two and five Multipliers to the mix. Multipliers can be landed up to a cool x10 the wager.

Scylla: The character for landing Mystery Symbols, Scylla will land on reel 4 in the basegame. Between five and nine Mystery Symbols can be activated in this way.

While Hugo Carts has been designed to bring a new experience to the best online casino NZ sites, the developer has focused on maintaining his beloved cheeky character.

Hugo has been a popular character on the iGaming scene ever since 2016 and is today the golden star of a total of six titles in the series. Other online pokies games in the series include Hugo’s Adventure and Hugo Football.

The latest Play’n GO release is highly animated and boosted by a variety of special graphics and designs. This greatly enhances the player experience as a whole – making Hugo Carts a game for the history books.