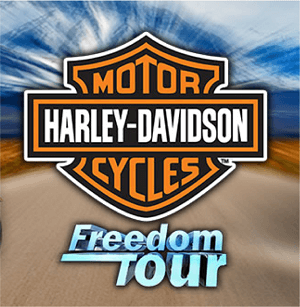 A Harley-Davidson and the open road can mean only one thing: adventure! Software developer IGT has shown its adventurous side with the release of Harley-Davidson Freedom Tour.

The developer no doubt has high hopes that the brand new online pokie’s 5 reels, 30 paylines, and 6 different bonus features will get players’ engines started. The reels are set against a classic US highway, and feature all the prerequisites for the road trip of a lifetime.

Harley-Davidson Freedom Tour can be played for as little as 0.50 per spin of the reels. The game uses the same style of easily-navigable interface found on other IGT online pokies games, and includes an Auto Play function that allows players to predetermine game parameters, and then sit back and watch the action unfold.

Among the symbols found on the reels are helmets, keys, bikes, and the official Harley-Davidson logo. The iconic logo is the pokie’s highest-paying symbol, and will pay out 500 times the player’s bet if 5 land on an active payline.

The 6 bonus features players encounter on the Harley-Davidson Freedom Tour are either triggered at random or as players follow the map of the route. Players collect bonus symbols as they pass points, and after every 3 bonus symbols collected, are offered a chance to spin a bonus wheel.

Wheel spins could result in prizes such as coin payouts or the unlocking of 1 of the bonus features. The Free Ride Free Spins feature award players 3 free spins with additional Wild symbols, while the Showroom Bonus feature requires players to select items on the screen to win prizes.

The Harley-Davidson Freedom Tour Rumbling Mystery Wilds features could see as many as 4 reel symbols Wild, which could lead to numerous winning combinations. The Expanded Top Award feature is linked to the bonus wheel. If players trigger this feature, the bonus wheel can be expected to favour the better prizes when spun by players.

Another innovative feature of the Harley-Davidson Freedom Tour is that players can save their progress through the game. The saves are reflected on the map as journey stops, whether at a point of interest, at a diner, or at a motel.

The new online pokie is sure to inspire even greater interest in the software developer already known for excellence in gaming. Any pride IGT has in its new game is justifiable.