Microgaming Pays It Forward Once Again 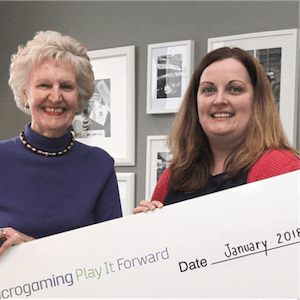 Renowned iGaming software developer Microgaming has now shared £30 000 equally among four different charities as part of its PlayItForward CSR initiative. Through the UK giant’s Gift of Giving programme, Microgaming’s customers are able to vote for charities in their home regions – including the UK, Europe, the Isle of Man, Africa, and the rest of the world – as recipients for the developer’s regular charitable donations.

Instead of spending money on Christmas gifts, Microgaming sends donations to its players’ selected charities in their own respective regions. The latest vote took place last December as part of the Gift of Giving initiative, with Microgaming donating a whopping £150,000 to selected charities during that period of time.

For the second year running, the European Teenage Cancer Trust, Women’s Refuge in the Isle of Man, Save the Rhino International in Africa, and Médecins Sans Frontières (Doctors without Borders) for the rest of the world were voted on most in each region. Each of these charities received hefty payouts from the British online and mobile casino gaming specialist as a result.

Women’s Refuge has provided support for families for over 20 years, offering safe temporary accommodation for women and children who have been the victims of domestic abuse. The UK-based Teenage Cancer Trust works with cancer patients from age 13 to 24, providing support and counselling to them and their families during an especially difficult time in their lives.

In Africa, rhino poaching has left these animals’ numbers dwindling, nearing the point of extinction. Save the Rhino International has received Microgaming’s own vote for three years in a row, and has a vision to see all five species of rhino recover and thrive in the wild. Alongside its partners, Save the Rhino International supports endangered species in Africa and Asia, and has received over £25,500 from Gift of Giving over the past three years.

Médecins Sans Frontières (Doctors Without Borders) is a well-established charity that was first founded in Paris, France back in 1971. The charity operators as a medical and humanitarian organisation, offering emergency medical care to those who have been the victims of armed conflicts, natural disasters, poverty, and disease epidemics.

Médecins Sans Frontières received donations from Gift of Giving both in 2014 and again in 2016, allowing the charity to continue its great work and save lives around the world.