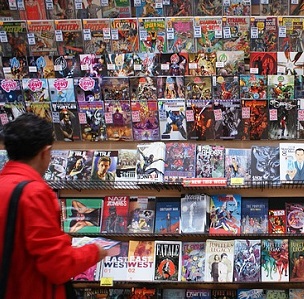 Ever since acclaimed New Zealand director Taika David Waititi took a stab at the Marvel cinematic universe, smashing Thor: Ragnarök out of the park and receiving critical acclaim, interest in comics locally has spiked. But, if you’re one of those Kiwis finding new interest in comics, you may have noticed that some titles can be a surprisingly pricey. Though given the immense quality of physical copies these days, its generally justifiable.

On the other hand, there are some comics that are worth sums of money that absolutely boggle the mind. These are the ones that collectors salivate over, and might even go to extraordinary lengths in order to obtain. Let’s take a look at the comic books that might just break the bank…

Did you know that the Hulk was originally meant to be grey? It’s true. As chance would have it, though, the printing presses at the time had difficulty with the colour, making him appear more green than grey. So after much fuss, it was eventually decided that The Hulk was green.

Speaking of green, a good condition copy of The Incredible Hulk #1 goes for about $320,000. That’s United Stated dollars. We know what you’re thinking; better hit a casino online and land a jackpot, right? Or get on your best camouflage outfit, and try steal it the old fashioned way. We won’t judge, either way.

If it isn’t already obvious at this point, the most valuable comics are those with a 1 printed on the cover. In this case, it’s those uncanny, astonishing X-Men. A #1 copy recently sold for $492,937. Why such a specific number? Who knows? The point is that it’s a crazy amount of money for what is essentially a children’s storybook.

Who is it that pays that sort of money for children’s storybooks? Also not known. Though, if you’re running to your attic and pulling down old boxes in hopes of finding a few valuable titles, do keep in mind that this sort of cash is only commanded when the pages, down to the finest detail, are in excellent condition. Valuable comics are only worth eye watering sums of money if they are in pristine condition, and if they have never been opened, the pages thumbed and the spines bent even slightly; they are worth their weight in gold.

Wait a second, this doesn’t have a 1 on it, why is it worth over $1 million? Because this is the first time that Batman happened to make his appearance. Yes, it was in a random issue of a series. This series later became DC, for those paying attention.

In case you’re wondering, it was also the first time that Commissioner Gordon made his first appearance. Which, needless to say, is probably what added so many zeroes to the value. That and the fact that in 1939, paper quality wasn’t great, so top grade copies of this title are extremely rare.

You’ve probably heard this called Superman 1, but that isn’t the case. It happens to be in this series that Superman first appeared. Although you likely know what the cover looks like. It’s the one with Superman holding a green car over his head.

Fun fact, Superman couldn’t originally fly. He also had a grab bag of weird, unspecific powers that really didn’t make much sense. In some cases he had telekinesis, and in others he wasn’t as strong as he is today. It wasn’t until later that he was nailed down into a much more coherent character. Either way, this title will cost you a whopping $3,207,852 if you want to add it to your collection.