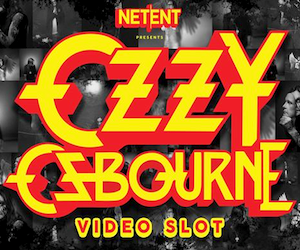 NetEnt will once again be collaborating with The Prince of Darkness to deliver a phenomenal online video pokies experience to players and fans. It’s set to be another title in NetEnt Rocks series and will star Ozzy Osbourne, the lead singer of the English rock band Black Sabbath. The game will feature illustrations by Osbourne as well as licensed music from his previous work as a solo musician, and is named after the icon.

An Icon On the Reels

Bryan Upton, the Director of Games at NetEnt, called Ozzy “archetypal”, describing him as one of the names that transcend the limits of the music industry. Upton said that although Ozzy is fondly known as The Prince of Darkness by his fans, the rock star has had a very colourful career and that his company is ecstatic to play a part in his latest gig. Upton said that the great gameplay and thrilling theme of the Ozzy Osbourne pokie will appeal to not only fans of the musician himself, but those who simply enjoy pokies too.

Barry Drinkwater is the Chairman of Global Merchandising Services and Promotions and Brand Management Partner to the musician. Drinkwater said that his company has been looking forward to this pokie going live since they signed the deal with the gaming software provider, and confirmed that they’re very happy with the result.

The Ozzy Osbourne game is a video pokie with a classic feel and a decidedly modern twist. Players will find 20 fixed paylines along with a 5X3 grid format in this medium-variance pokie that is filled with a range of features and striking graphics. The reels will spin against the backdrop of a stage located in a deep, dark place, in light of whom the pokie is celebrating! Free Spins will fire up the platform whenever they occur as electricity shoots across the reels, lighting icons as it goes.

Ozzy Osbourne features Respins and Free Spins, along with a Symbol Charge Up option. When the latter is activated, before a Respin or Free Spin, one or more extra features will be awarded. It could be a Coin Win, Multipliers or Wild Symbols being added into the mix, or Symbol Upgrades being performed. The Bonus Beat option is also exciting, allowing players to boost their chances of winning whilst also adding another Free Spin to gameplay and increasing the value of Multipliers.