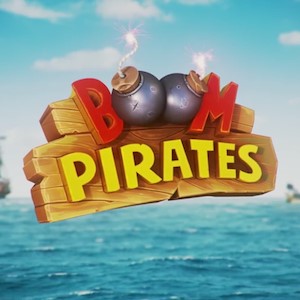 Over the next few weeks, selected Microgaming casinos will be offering players the chance to the try out the exciting new Foxium and Microgaming pokie, Boom Pirates. Microgaming first collaborated with Foxium in 2017 to create Vampire: The Masquerade, which was released on the developer’s Quickfire platform. In the two years since, the Estonian-based studio has worked closely with Microgaming to create high-quality, story-telling video pokies games that players have really taken to.

Boom Pirates is set to be yet another success for the studio, and it will be available exclusively at selected online casinos for 5 weeks, before it goes live at Microgaming operators globally.

Ahoy Mateys, There Be Pirates

While we don’t have the full details of Boom Pirates as yet, we do know quite a bit about what this pirate themed pokies adventure is set to offer players in New Zealand.

Foxium released a promotional video for the game a couple of months ago, and it immediately caught our attention. From the video we know that the game is about of a bunch of scallywag pirates, captained by a beautiful yet stern-looking redhead who’s is sailing the seven seas in search of treasure, or anything worth scavenging. The pirates come across a small inhabited island, and an attack ensures. This is the setup for the game, so we can expect images of large cannons, pirate ships, swords, gunpowder and the likes across the reels.

It appears that, like many popular pokies, Boom Pirates is a 5-reel, 3 row, 20 payline game with an RTP of 96.5%. Based on previous Foxium releases we can assume the graphics are going to be of the highest quality. Players can look forward to 3D visuals, a rollicking sound track and exciting sound effects to tie it all together.

For now, we can only guess what the symbols might be, but we wouldn’t be surprised if the pirates themselves are used as the high paying symbols. We do know that the game is not a progressive, but it does have a decently sized set jackpot payout for landing all 5 of the highest paying symbols on the reels.

We also know that it will have a Wild symbol, a Scatter symbol, and a free spins feature that will probably be triggered by landing 3 Scatters on the reels at the same time. In terms of bet structure, the minimum bet will be 0.20 and the maximum 100.00 coins per spin.

Foxium is a small casino game studio headquartered in Tallinn, Estonia. Less than a year after they were founded, they launched their first game Big Time Journey, which was a surprise hit at online casinos. After their second release they signed a deal with White Wolf Publishing and then Partnered with NYX Interactive in early 2017. Their big break came towards the end of 2017 when they joined forces with Microgaming, allowing them to launch their games on the Quickfire network.

Now, by the looks of things, Boom Pirates is set to make Foxium a force to be reckoned with, and players who want to get in early can try the new pokie out at top casinos that are part of the exclusive launch.