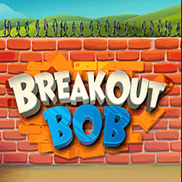 A crime caper comes to the reels for online pokies fans in New Zealand. Breakout Bob, a Playtech game with a variety of bonus features and a 15,000x your stake potential maximum win, is available at recommended casinos.

The game is set in a prison yard, where the title character, dressed in orange, keeps an eye on proceedings. Breakout Bob has 4 reels, 6 paylines, and a 96.52% RTP.

The regular symbols that appear on the online pokies reels include Bob himself as the highest paying regular icon, a police officer holding a truncheon, a helmeted police dog, a pile of banknotes and coins, and a pair of handcuffs. The bonus symbols you might see if you play pokies at one of the best online casinos NZ offers include Scatter bombs and Wild explosions.

The online pokie Free Spins round will trigger whenever 3 or 4 Scatters land on the reels. Depending on the number of Scatters that activate the feature, you’ll receive 12 or 18 Free Spins. If more Scatters land during the round, they will be registered on a meter, which will re-release them onto the reels as random Wilds on the last Free Spin.

The Fortune Wheel is a randomly triggered Breakout Bob special feature. You could see it trigger at any point during the game when playing it at the best online casinos NZ players have access to. If the feature does activate, you can play a mini game in a new screen. Playing the game involves little more than spinning the Fortune Wheel, which offers you the chance to win the Minor, Major, or Grand Jackpot.

If the bomb feature activates randomly during the Breakout Bob basegame, you will win between 4 and 6 Free Spins. Each of those spins comes with a Multiplier that increases if a spin doesn’t land a win. The highest Multiplier you could see is 25x your bet.

Thanks to Playtech’s award-winning online pokies software, Breakout Bob is playable on computers as well as on mobile devices. You can play the game for between 0.05 and 500.00 per spin at the best casinos online for players in New Zealand.