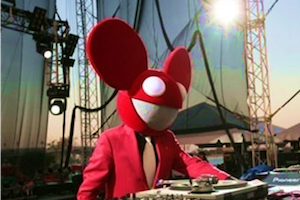 If you have been anywhere near progressive house music in the last decade, you probably need no introduction to deadmau5. You may also understand then why Microgaming’s announcement of an online pokie based on the Grammy-nominated music producer and DJ is big news for the provider.

According to the provider, the new casino game’s visuals were created by deadmau5 for his most recent tour, cube v3. The title will also feature other creative content. Like the provider’s other licensed music-themed online pokies, the game will include several hit tracks, as well as various special features.

Due For Release This Year

Fans and players will not need to wait particularly long to play the planned deadmau5 online pokie. The award-winning game provider’s chief commercial officer, Jean-Luc Ferriere said that the title will be released this year.

The provider is offering a glimpse of what might be one of the provider’s biggest pokies of the year at ICE London 2020, which will also see other new branded casino games. The conference is currently underway in the UK capital.

Ferriere also explained that Microgaming is not handling the game design. Instead, it is being created by Eurostar Studios, a creative partner. He added that inclusion of deadmau5 among the company’s branded casino games was another example of how the provider is constantly trying to add variety to its offering.

Known professionally as deadmau5, Joel Zimmerman was born in Canada on 5 January 1981. He is one of the best-paid producers in the world. In addition to a packed discography of his own albums, E.P.’s, and singles, his tracks also have appeared on compilation albums released by Armin van Buuren, Tiësto, and others.

Although the first deadmau5 studio album was released in 2005 and was followed up with another record in 2006, the album that really launched his career was 2008’s Random Album Title. It was a career long in the making, as he had been creating music since he received his first keyboard for Christmas when he was in his teens.

Deadmau5 has been nominated for Grammy Awards 6 times. He also has been nominated for, and received, other music awards. Among them were International Dance Music, Juno, DJ, and Beatport Music awards. In addition to establishing the Mau5trap record label, he has collaborated with DJ Aero, Steve Duda, and Tommy Lee in the group WTF? He also worked with Duda in the group BSOD.

When DJ’ing or performing live, deadmau5 usually wears a mouse head mask, and that’s how he’s sure to appear when he graces the reels of Microgaming’s upcoming online pokie.