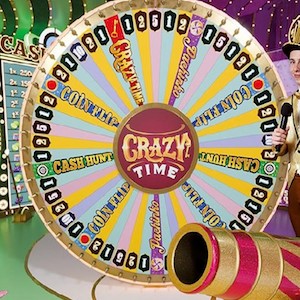 Live casino game specialists Evolution Gaming blew audiences at ICE London away with a showcase of Crazy Time. Referred to as the ‘the most fun casino game ever created,’ the title went beyond all expectations in delivering a strikingly visual live casino experience. It was widely praised for utilising unique mechanics, an over the top game show style presentation, all while offering the opportunity for players to walk away with big money.

Now Crazy Time has finally been released for public play, and everything experienced at ICE London has made it into the final version. This includes the four bonus games, various layers of player interaction, money expanding multipliers, and, of course, the outrageous game show theme. As expected, public reception has been overwhelmingly positive.

The bonus bet rounds include Pachinko, Crazy Time, Cash Hunt, and Coin Flip. If any are hit during a spin, the game shifts tone dramatically, changing to a completely separate mini-game bonus round. It is extremely ambitious, and stands as testimony to Evolution Gaming willing to go well beyond what is expected in delivering a cutting edge experience.

Needless to say, developing the title and operating it Live is no small challenge. In fact, according to a spokesperson, it is the most expensive project Evolution Gaming has ever produced.

State Of The Art

The spokesperson went on to explain that the live casino game had been in production for over a year before being showcased, with various teams collaborating on cutting edge technology. But most will agree that the end result, a combination of augmented reality, large scale Random Number Generator mini-games, and incredible variety, have made the challenging development well worth it.

Todd Haushalter, chief executive product officer at the studio, shared a few thoughts. He explained that the core concept behind Crazy Time had been to create a title that was as much fun to watch as the best popular TV game shows. The key to this, he declared, was to provide as much variety as possible, as well as giving the ‘audience’ the chance to directly participate, if they chose to do so.

The game is now available to play, and seems to fast be on track to become a true live casino game favourite.