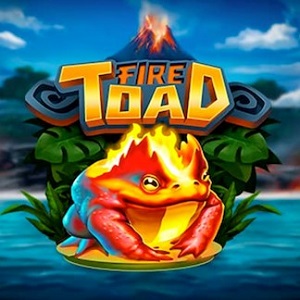 When it comes to online pokies, developer Play’n GO can generally be relied on to deliver a quality experience. However, their latest release, Fire Toad, may just be one of the most unusual NZ online pokies to come along in some time. As the name suggests, the game is based around flaming toads. But as to what exactly a flaming toad is remains a huge question, other than a rather cute creature that happens to be on fire.

A spokesperson from the studio explains that the fantastical game is set in fantasy version of Hawaii, where volcano activity is at an all-time high. As a result, the local amphibians have evolved into fiery versions of themselves. Truly one of the more bizarre online pokie NZ settings. Even still, Fire Toad is an interesting release that delivers in all the right way.

As far as online pokies go, Fire Toad is a pretty standard affair in terms of basic gameplay. The slot utilises 5 reels, 4 paylines, and 1,024 ways to win. The symbols include a cast of burning frogs, toads, and tadpoles, most of which are perched on Lilly pads. The special symbols include the Firefly Scatter, which also doubles as the Wild, and the Fire Toad King, which is the highest paying symbol in the game.

As has probably already been guessed, the true drawing card here is the outstanding art and dazzling special effects. Fire Toad is, simply put, possibly one of the best looking NZ online pokies in years. Each one of the expertly crafted toads animates when matched, demonstrating the extraordinary talent found at Play’n GO. Additionally, the animated flames present in virtually every inch of the game look real enough to singe off a few eyebrows. If any online pokie NZ deserves an award for graphics, this is it.

Fire Toad doesn’t attempt anything ground-breaking as far as online pokie bonuses are concerned, but still delivers some interesting payout potential. The Firefly Scatter and Wild combination is where most of the wins will be coming from.

As a Wild, the symbol will rack up huge wins, especially when paired with the Fire Toad King. When matched 4 or more times the Scatter will grant Free Spins. However, during the spins it is possible for more Free Spins to be awarded, assuming that additional Fireflies match during the process.

Fire Toad is an online pokie classic waiting to happen, and certainly worth a look at a top Kiwi friendly casino.

Want to play pokies NOW? Sign up at a TOP casino!