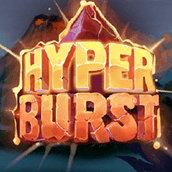 Trust respected iGaming developers Yggdrasil to produce a pokie that is genuinely unique, and truly creative. Hyperburst, although not having the most original name, truly shines in all other regards. The concept is that a volcano, worshipped as a god by locals, is on the verge of erupting. Though in this case the scorching lava isn’t dangerous. Instead it happens to hold the keys to some incredible riches, with the fiery molten rock turning everything it touches into potentially massive payouts.

From its great artwork, to its interestingly rich backstory, Hyperburst stands apart as a wonderfully entertaining pokie. Not in the least because the special features happen to tie in exceptionally well with the theme, so much so that players may just forget that the tropical island in the game isn’t a real place.

First and foremost, the 4 rows and 25 paylines in Hyperburst are dripping with intricate artwork, and well thought out imagery. The towering volcano sits behind the grid, ready to erupt at any second, and spew its lava over the reels. But that is just the start of the detail that has gone into the visuals. Each symbol is used to recreate the fictional religion that has built up around the volcano, including many beautiful masks, all of which look real enough to touch.

The passionate attention to detail extends to the gameplay, with the core idea being that the luckier the pokies player is, the closer the volcano is to erupting in earnest. Each win awards an instant respin, which in itself is already impressive. However, combine this with the fact the reels also expand after each win, and you start getting an idea of where things are going.

Chain wins are the name of the game in Hyperburst, with each consecutive payout making an additional payout more likely. A meter to the left of the reels gradually fills with lava, trigger multipliers along the way. The maximum multiplier possible is x10, which is also when the volcano will erupt in a mega-payout round.

But even before the eruption, more and more molten rock will flow over the reels between spins, transforming symbols into mega versions of themselves. Needless to say, the bigger the symbols, the bigger the payouts.

All in all, Yggdrasil have once again managed to produce a standout pokies game. Enthusiastic players will have plenty here to enjoy, and so much more.