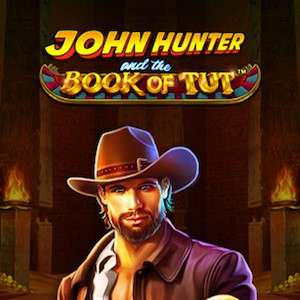 Fans of Pragmatic Play’s super-popular John Hunter series of online pokies will be elated to learn that the development powerhouse has just released the 4th instalment in the series, namely John Hunter and the Book of Tut.

The release of a new John Hunter instalment is a clear indication of the rapid momentum at which the Pragmatic Play team has been progressing of late. The brand has also been busy with everything from upgrading existing systems, to enhancing its popular Live Casino portfolio of games.

Its A Journey Of The Imagination

As for the latest John Hunter pokie’s adventure, our hero this time round discovers himself smack bang and dead centre in the middle of what seems to be a desert oasis lying in wait for the coolness of morning to break under a temperamental night-time sky. The mood is instantly set: adventure awaits, and our intrepid explorer is more than prepared to weather any which challenge or storm.

Ancient pyramids towering in the distance completes the flight of the imagination as players are whisked away to the infamous Valley of the Kings as they embark on an adventure-packed quest in search of Tut’s treasure.

The 5x3 grid of John Hunter and the Book of Tut is instantly transformed into an Egyptian-themed quest for finding all the king’s riches and at a maximum jackpot payout of 500x the player’s bet, five of a kind on these reels means discovering treasure untold indeed.

The symbols in John Hunter and the Book of Tut each serve a unique and special purpose. Themed, higher-paying symbols include an Egyptian Cat, a Scarab, Tut himself and of course, our man John Hunter. There is also a symbol depicting an Ancient Book – this serves as both the Wild and the bonus Scatter symbol. The inclusion of playing card symbols ranging from 10 to Ace serves to mix the combinations up on the pokie’s reels.

An exciting instalment is that of the Free Spins bonus feature. An added benefit as that players in permitting regulated jurisdictions are now able to purchase the activation of the Free Spins feature at their leisure. The feature is as a rule triggered when 3 or more Ancient Book scatters land anywhere on the online pokies reels, but in John Hunter and the Book of Tut it can also be bought at a players discretion.

Pragmatic Play Chief Commercial Officer Melissa Summerfield said by way of an official company press release that it’s a sheer delight for the entire development team to be in a position to release yet another instalment in the incredibly popular John Hunter series of online pokies. John Hunter, said Summerfield, has been exceptionally well received by fans the world over and they hope John Hunter and the Book of Tut will be yet another smash hit.