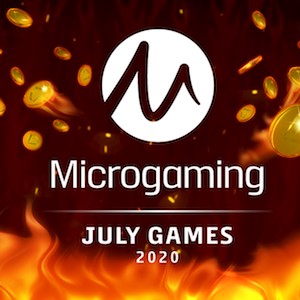 Over the years, Microgaming has showered the iGaming sector with some of the most entertaining pokies ever released. And following the software developer giant’s “coming soon” release for the month of July, the award-winning casino games developer is far from done wowing its global player audience.

So much so that July is shaping up to a month among months for iGaming and entertainment. Games by Snowborn Games, Triple Edge Studios, Just For The Win, and All41 Studios are just some of what players can expect to look forward to.

Snowborn Games is up first with its vibrant and psychedelic Miami Glow online pokie. The game promises a journey back in time to the musical brilliance of the early 1980s. The five-by-three set of reels and superb bonus features make it possible for players to secure a maximum jackpot of up to 12,500x their original bets. Released earlier on this month, Miami Glow is now live.

Pick a POKIE that you love and win. Play online .

All41 Studios are the creative geniuses behind the next-up Mayan Eagle pokie, released on July 7th.  Pegged as a casino game with a high-volatility rating, Mayan Eagle is a thrilling jungle adventure potentially leading to maximum wins of up to 13,000x the player’s initial bet.

The game is presented in the style of a Mayan adventure and features the studio’s propriety Nobleways™ gamification feature, 16,625 ways to win, Rolling Reels™, and a Free Spins special bonus feature like no other pokie before it. Try life-changing wins for size!

Immortal Glory–Just For The Win

If any single pokie had to be singled out as a release especially exciting to be looking forward to, then it’s got to be Just For The Win’s Immortal Glory, due for release on 14 July. Another high volatility casino game, Immortal Glory will feature 40 paylines and maximum winnable jackpot totalling 10,000x the player’s bet.

Just For The Win will also be entertaining players with their upcoming July 9th release of Arthur’s Gold. Jam-packed with free spins, respins, and wilds that are constantly expanding, Arthur’s Gold promises to be a real winner.

Last but not least as far as the big-studio releases for July go, is Triple Edge’s new Diamond Inferno. Due for release on 21 July, Diamond Inferno will blaze its way into the hearts of classic casino pokie lovers. A multiplier trail and free spins are just some of what to expect in this upcoming casino game.