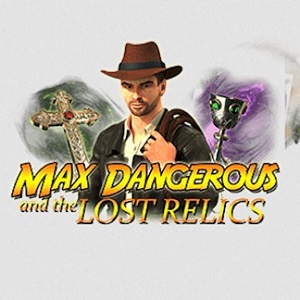 Spanish based online casino software developer Red Rake Gaming seems to be on a winning streak. It wasn’t long ago that the studio signed a supply deal with The Ear platform. Now, with barely a pause for breath, the studio has released another interesting online pokie. Titled Max Dangerous And The Lost Relics the game is based around an Indiana Jones inspired character. But in this case the player is taken along for the adventure, and may potentially share in some of the lucrative treasures along the way.

Max Dangerous And The Lost Relics features 5 reels, 50 paylines and a 95.3% RTP. The draw card is the special features, of which there are a total of 5. As to whether the player experiences all 5 specials is, of course, a matter of luck. But there is plenty of fun to be had regardless, with action and danger lurking in each spin of the reels.

As far as visuals are concerned, Max Dangerous And The Lost Relics is a charming online pokies experience. Red Rake Gaming may not produce the impressive animations of some other studios, but makes up for it with charm and creativity. Max can be seen sporting a whip, with a dank, mysterious tomb stretching out behind him. Either way, the draw of the pokie isn’t the graphics, but rather the long list of unexpected features.

With cascading reels, Sticky Wilds, multipliers and more, the player never knows what may happen next. Furthermore, a spokesman for the developer declared that the gameplay is designed to be as fast and frenetic as possible, keeping the player’s pulse pounding at all times.

A whip, a cup, a hat, an airplane and a skull are the tickets to adventure. Landing 5 of each on the online pokie’s reels will trigger the associated special feature, during which big payouts are almost guaranteed. Filling the cup triggers 12 Free Spins, combined with a multiplier. The whip symbol triggers a once off multiplier, the plane turns a row into identical matching symbols, the skull generates Sticky Wilds, and the hat grants standard Wilds.

All in all, this may potentially be the best online pokie from Red Rake Gaming to date. But, if that is true or not remains to be seen, given that it is only now releasing to the public. Those interested in trying it out for themselves will find Max Dangerous And The Lost Relics available at Red Rake Gaming powered online casinos.