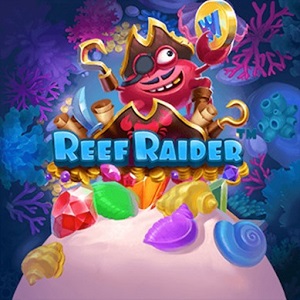 NetEnt is amongst the most respected developers for a reason, namely because their online pokies are truly outstanding. Thus, when the developer announced Reef Raider, iGaming enthusiasts sat up and paid attention. The game, as the name suggests, is themed around diving underwater, exploring reefs, and searching for big payouts.

On a technical level Reef Raider utilises a slightly unusual 7 by 7 grid, backed by a cluster pays and avalanche system. The volatility is rated as medium, and the RTP comes in at 96.1%. As would be expected from NetEnt, the artwork is impressive, featuring an animated pirate crab and various coral, shells and other oceanic oddities.

NetEnt online pokies always come with a quirk, and in the case of Reef Raider it is a pirate crab. There is no explanation as to why a tiny crab is outfitted as a pirate, sporting a classic hook hand an eyepatch. But then little explanation is needed, other than for the crustacean to keep the player company.

Apart from the crab, Reef Raider plays out in the expected manner. 5 symbols are required to make a match, which will grant an instant payout. But, this being an avalanche system, matched symbols disappear, leaving open space for new symbols to fall in and occupy the gaps. Chain winning combinations are therefore possible, potentially awarding massive payouts.

According to a NetEnt online pokies spokesperson, Reef Raider has a number of interesting special features. The spokesperson explained that the bonus system is referred to as the Treasure Trail, visible around the outer edge of the grid. Players start at the beginning of the trail, and as they match Wilds during the course of gameplay move a space forward. As they move various bonus points are visited along the way, thereby unlocking additional special features. The most notable feature is the Mystery Chests, which are triggered when 9 spaces on the Treasure Trail are traversed.

Once the Treasure Trail has been fully conquered, requiring that a total of 15 Wilds are collected, the ultimate treasure is finally unlocked. In the case that treasure is a Free Spins round, offering the best chance for massive potential payouts.

As far as online pokies go this looks to be an instant classic. No doubt NetEnt fans will be keen to head out, take a few spins, and befriend a pirate themed crab.