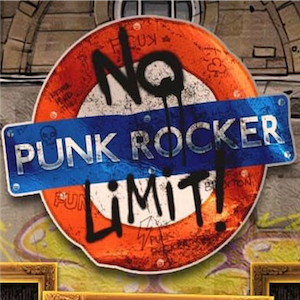 Edgy Malta iGaming developer Nolimit City have unveiled their newest online pokie, and it took some by surprise. The game is called Punk Rocker xWays, and at first glance is one of the more striking titles to be released recently. The theme is 1970s Britain, complete with extremely convincing artwork, anti-establishment symbolism, and even some visuals that might raise a few eyebrows.

Most notable of all is that every symbol in the game is worthy of an official art gallery display. Obvious amounts of talent and effort have gone into each symbol’s creation, from gaudy, tattooed punks sporting Mohawk hairstyles, to a monkey wearing a crown, and even the once popular Anarchy sign. Molotov cocktails, combat boots, and a guitar pedal are also featured, including an Albert Einstein dressed up like a thug.

All in all, as far as visual design goes, this is one online pokie that doesn’t compromise in recreating an accurate punk rocker scene in the 1970s.

Punk Rocker xWays features a 5 reel, 243 Ways To Win system. Matching the high symbols will grant the biggest payouts, as would be expected from a standard spinning reel game. But things quickly get chaotic, when breaking away from the basics. The first feature to look out for is the Expanding xWays Mystery Symbols. When an xWays symbol lands on the reel, it will expand, granted more winning opportunities.

Things get even crazier with Riot Respins. If any 2 Scatters appear on the reels, represented by the skull symbol, an automatic respin is triggered. But, during the respin, the Scatters will explode into flames, become a Wild, and lock in place, increasing the likelihood of a win being achieved.

Increase the number of Scatters to bump up the bonuses. 3 Scatters equal 8 Anarchy Free Spins, and 4 Scatters equals 8 Civil War Free Spins. During the free spins sequences, the Scatters will jump randomly onto position on the reels, either becoming Wilds, or multipliers.

Standing Out From The Crowd

With Punk Rocker xWays now revealed to the public, and already being an online pokie that is drawing major attention, Nolimit City’s Per Lindheimer made a few comments. Lindheimer did not mince words in explaining the design of the game, pointing out that its bombastic were very deliberate.

The brazen style was a way to stand out from the crowd, Lindheimer elaborated, and hopefully convince operators to pick up the title sooner rather than later.