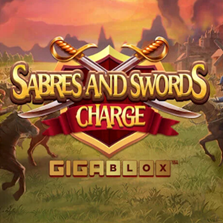 Respected developer Yggdrasil, in collaboration with Dreamtech Gaming, have gone all out in their latest online pokies release. Sabres And Swords Charge is all about war, seeing conflicting armies go head to head in an all-out assault. But, thankfully, this is the sort of war that offers big payouts, as opposed to big casualty numbers. Notably, the online pokies uses the well-received GigaBlox system, which makes the release all the more intriguing in the gameplay department. The game can be tried out now at a best online casino NZ.

Sabres And Swords Charge came about due to the Yggdrasil run YG Masters program, which offers smaller third party development studios the chance to create something special. Access to the GATI technology toolkit is also provided, granting everything that is needed for true online pokies gold to be born. In this case it was Dreamtech Gaming that signed up to take advantage of the program.

Sabres And Swords Charge is an online pokies that doesn’t hold anything back. It is rare that an iGaming release so boldly depicts war, yet here it is the unabashed, overall theme. Soldiers are seen charging on either side of the grid, engaged in what looks to be a furious battle. Which side will ultimately win is up to the player, who depicts the tides of conflict with each spin.

Sabres And Swords Charge utilises a 6 reel, 6 row grid, backed by 50 paylines and a 96.11% RTP. The big drawing card is, of course, the GigaBlox system, which instantly makes every spin something new and interesting. The mechanic means that, ultimately, symbols will almost never be the same size. From 2x2 blocks, to monstrous 6x6 blocks, there is no telling what will appear next.

In terms of specials the game has a few, with the Engage The Enemy Free Spins feature standing apart as particularly interesting. If players are lucky enough to match Scatters, a number of Free Spins are awarded, though with an intriguing twist. During the Free Spins all the lowest paying symbols are removed, drastically increasing the chances of high paying payouts occurring.

In regard to the new online pokies, a Yggdrasil spokesperson shared a few thoughts. The spokesperson said that the GigaBlox mechanic had been a success, and as such it was only natural that it be carried over into a new release.

Those keen on waging war can head to a best online casino NZ now.

Sign up and spin the reels! Be a winner with online pokies.