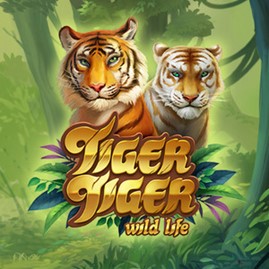 Respected iGaming developer Yggdrasil is at it again, this time in partnership with Gluck Games (G Games.) Together the companies put together an online pokies that really defies expectations, aptly titled Tiger Tiger Wild Life. As would be expected, tigers play a big part in the theme, though they aren’t the only tropical wild life to make an appearance. Tiger Tiger Wild Life is due out on the 18th of October, and can be tried out at any of the best online casino NZ has to offer.

At first glance it is clear that the developers have put a ton of effort into accurately recreating a rain forest setting. The grid is surrounded on all sides by vast, towering foliage, with shafts of light penetrating a seemingly endless leaf canopy. It is a wonderful setting for an online pokies, and likewise a treat for players to finally be getting away from the now long oversaturated ancient Egyptian theme.

But what exactly can a player expect to run into in the rich, diverse greenery?

It is best to think of Tiger Tiger Wild Life as an online pokies sightseeing tour, with the player on a mission to spot as many animals as possible. Though, apparently this rainforest has a bit of a big cat infestation, given how frequently the animals seem to pitch up. There a few other symbols as well, however, including the traditional 10, J, Q, K, A, a Scatter, a Wild, a Cash Collect, and a Quickhit.

As far as the grid is concerned, it is a fairly standard 5 reels and 4 rows, backed by a slightly lower than average 95.15% RTP, as well as 25 fixed paylines. The game is also rated as having low volatility, making it suitable for casual online pokies players that are looking to get the most out of ever spin.

It is, first of all, the Bengal Tiger that is the king of this jungle. This animal is the highest paying in the game, awarding up to 200x the original stake if matching 5 times. The Scatter, which appears as the roaring tiger, is the ticket to big win potential. Matching at least 3 will grant Free Spins, opening up the possibility of hitting the biggest payout in the game; 2,000x the original bet for that spin.

Tiger Tiger Wild Life is out soon, and jungle explorers will be keen on checking it out at a best online casino NZ makes available.