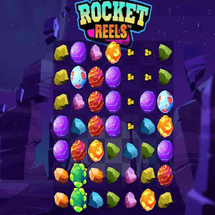 While the graphics are cartoonish, the symbols are playful and full of vibrant colour, which greatly adds to the visual appeal of Hacksaw’s latest online pokies creation.

While Rocket Reels is classed as highly volatile, it does offer the player the chance to compete for the top Jackpot of an incredible 10,000x the value of the basegame wager. And at a perfectly acceptable 96.3% RTP, it shouldn’t be too difficult to bag regular real-money wins.

Symbols include a vibrant variety of planets, comets, astronauts, and floating space debris. And with bets starting out from as little as only $0.10 for a spin, everybody’s invited to become a potential Rocket Reels champion space invader.

The way in which the theme is presented will ensure an enjoyable online pokies session for any player entertained by outer space adventure-style pokies. Several amazing bonus features have been included also, which makes of Hacksaw Gaming’s latest online pokie a potential new favourite among players in search of excitement and instant cash prizes.

Bonus features and symbols include increasing Multipliers of up to 75x the bet, a UFO feature, Free Spins, and more.

The launching Rockets are our favourite feature. When launched, the Rockets will instantly shatter all symbols that happen to cross their trajectory, while leaving in their wake Multiplier trails of up to a cool 75x the basegame wager.

The really cool thing about the Multipliers is that they’ll remain in place even once the Cluster Pays mechanic has removed all non-winning symbols from the grid.

Landing on more than one Multiplier at a time from a single combination of winning symbols will have the effect of those Multipliers being added together for even bigger online pokies payouts.

In Other Exciting News

The first collaboration of its kind between the studio and the operator giant, the partnership will see Hacksaw Gaming’s content launched across both the Paddy Power and Betfair brands of operators worldwide.