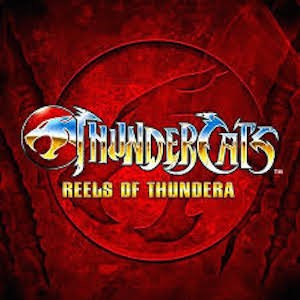 Premium casino game software developer Blueprint Gaming has paired up with Warner Bros. Consumer Products in order to launch yet another exclusively branded online pokies game. The new release is the company’s second pokie to be based on the iconic 1980s television series ThunderCats.

ThunderCats: Reels of Thundera is the title of the new game, which as mentioned above, has come as the second instalment in Blueprint’s ThunderCats series. Beloved characters like Tygra, Panthro, Lion-O, WilyKit and WilyKat will all make a reappearance on the reels this time, returning once more to fight Mumm-Ra and other nefarious villains. The reels and the symbols thereon have a distinctly 80s-style design, and the backdrop of molten lava will certainly keep players on their toes as they spin to win sensational cash prizes.

Awaken the Eye of Thundera

Any spin in the base game is capable of awakening the Eye of Thundera, which will in turn trigger one of seven thrilling modifiers. There are also six unique bonus rounds available to enjoy, and those who activate the big money round during the Ancient Spirit of Evil mini game can look forward to fabulous feline rewards if they can break Mumm-Ra’s control over Third Earth and help the Cats restore peace to the world.

Commenting on the new release, Blueprint Gaming’s Marketing Director Jo Purvis has noted that her company’s original ThunderCats release proved to be highly successful players. Now, the developer is expecting the same warm reception for the second title in the series, and Jo says that this one is set to provide the most thunderous online gaming experience yet.

More Branded Titles in the Works

Speaking further, Purvis added that ThunderCats: Reels of Thundera’s top quality graphics and immersive soundtrack recreates the action and thrill of the original TV series, noting that players are bound to love this wild new pokie as they help the Cats in their mission to battle the forces of evil.

Blueprint’s release of ThunderCats: Reels of Thundera is the latest one in a series of releases under its partnership with Warner Bros. Consumer Products. The business arrangement has also given rise to a number of other popular branded titles, including the likes of Top Cat, Mars Attacks!, and The Goonies.

As for future branded pokies, Blueprint has hinted in past press releases that there are many more in the works for 2019 debuts – but players will have to wait a little longer to see exactly what the expert software supplier has in store for them this year.