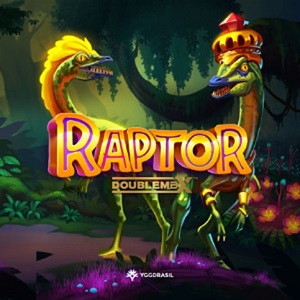 New Zealand reel spinning fans are in for a treat. Legendary developer Yggdrasil has released a new online pokie, and it might just be the company’s best effort to date. Called Raptor Doublemax the game invites players into a dark, dangerous era of dinosaurs. But in this version of the Jurassic age visitors don’t have to worry about getting eaten. Instead they have to cross their fingers and hope for a jackpot payout. Raptor Doublemax is available to try now at one of the best online casino NZ has to offer.

Looking a little closer the online pokies game is certainly impressive in the graphics department. The Yggdrasil art team have gone all out in accurately representing dinosaurs, having a host of them occupying the reels. From the familiar tyrannosaurus rex to the titular velociraptor, all the beasties are here, and all are looking better than ever. The inspiration was clearly the classic film Jurassic Park, and fans of the movie need not look any further than this to get another fix of dinosaur action.

In terms of technical details Raptor Doublemax operates on a 5 reel, 3 row grid, backed by a cascading reel system. It all looks fairly standard at first glance, but this is an online pokies Jurassic adventure that packs a lot more than meets the eye. First and foremost, the cascading reels are the ticket to big time wins. Each time a win is awarded a new Wild is added to the grid, meaning that matches become more likely for as long as a win-chain lasts.

Additionally, the Golden Bet option is always available, triggered by paying a 25% upfront amount. When Golden Bet is activated it means that each win in a chain adds a 2x multiplier, pushing payout potential into the stratosphere.

Things really get interesting when 3 Scatters are matched. Online pokies fans will be presented with a gambling mini-game, offering them the chance to bet it all for more Free Spins. A set of 4 dinosaur eggs appear on the screen, with the player free to make a selection. 1 of the eggs will increase the number of Free Spins, the other 3 will reset any payouts, take all Free Spins won thus far, and continue the game.

New Zealand reel spinning enthusiasts can head to a best online casino NZ now to try out Raptor Doublemax and face off against prehistoric monsters.