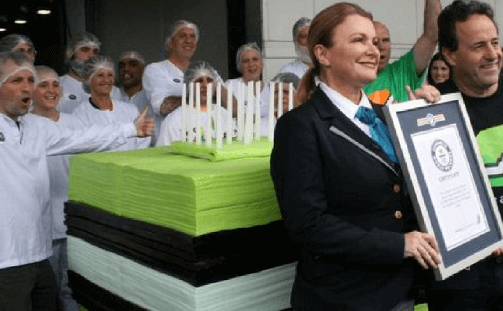 As New Zealanders, we have a lot to be proud of. Our beautiful country is home to several top achievers in various fields; and we hold around 100 Guinness World Records between us. Some of the records are for conventional activities and a lot of them, unsurprisingly, relate to sports. Many of the records are also important historical milestones, and there are quite a few that are just downright strange!

Whether it is contortionism, candle lighting, squeezing people into boxes or throwing washing machines, Kiwi’s have been smashing records that others still can’t beat. Take a look at some of the weird, the wacky and the wonderful world records held by New Zealanders.

The civic world records that New Zealand holds range from the very illustrious, to the not-so-very-illustrious. We were the first country to give women the vote, all the way back in 1893, but we also hold the record for the greatest distance between the same arresting officer, offender and offence.

Lord Glasgow signed the landmark Electoral Act into law on the 19th of September 1893, making New Zealand the world’s first self-governing country to allow women the right to vote in parliamentary elections. When you consider that women got equal voting rights to men in the United Kingdom in 1928, and North America in 1920, we’re streets ahead!

Our ignoble distance record comes about because a constable who ticketed Andy Flitton for speeding near London in the United Kingdom in 2008 did the same thing near Christchurch in 2010, when they had both made the sensible move to New Zealand. The exact same scenario unfolded in both places.

Records for Rugby and Extreme Sport

Our sporting nation has always been a source of immense pride for us Kiwis. We’re known for rugby achievements and stellar sporting performances even today, but we’ve actually been there right from the start.

On the 22nd of May 1987 All Black player Michael Jones scored the first try in the first-ever Rugby Union World Cup, in a home ground game against Italy. Former captain Richie McCaw also holds the greatest number of test caps in the world, at 148. The Haka, the traditional Māori war dance that the All Blacks have performed before every international game since 1905, is as celebrated as our athletic prowess. It’s only fitting, therefore, that the 2017 world record for the largest Haka (about 7800 people) is held by us.

We also hold the record for the most consecutive netball passes with 180, back in 2012, and the most players in a hockey exhibition match at 257, on the 17th of April, 2016. Anna Cochrane performed the world’s highest static trapeze act, at 3159.25 meters in New Zealand in 2016, and Kiwi Andrew Nicholson holds the record for the fastest circumnavigation of the world by bicycle, having completed the challenge in 123 days and 43 minutes, in 2015. And, of course, we were home to Sir Edmund Hilary who, along with Tenzing Norgay, a Nepalese Sherpa mountaineer, was the first to successfully summit Mount Everest. As you can see, the list goes on and on!

Even if you’re not particularly athletic or gifted in some other way, you can still set records. New Zealanders have never let a little thing like a lack of talent keep them from the history books!

If you where looking for the largest stripy Liquorice Allsort in the world, you’d find it in Levin, New Zealand. At 1001x0.994x0.786 meters, this record-breaking sugary sweet was made by RJ’s Liquorice in 2016 and smashed all previous records.

It seems that no one can beat us when it comes to munching our way through savoury delights either. The record for the most sausages eaten in a minute belongs to Stefan Paladin, who managed 8 in 2001. That’s over 1 sausage every 10 seconds!

We are also home to the oldest dance troupe in the world. The Hip Operation Crew has an average age of 79, and the most senior member of this Kiwi outfit no less than 95 years of age. And oddly enough, we are also proud to hold the record for the world’s longest soap bubble, which was created in our fair country when Alan McKay managed one of 35 meters in 1996.

There are always more records to be broken, and we should never rest on our laurels! Find something you can manage by yourself or in a group – people everywhere try for new world records each year.

You only need to clap louder than 113 dBA, toss a coin further than 14.06 meters or make a whoopee cushion larger than 6.03 meters (all records that are also held in New Zealand), after all!

Do a bit of research and let your imagination run wild, decide what to do, and discover our many other records along the way. Whether you just want to see your name recorded or you go all-out and try to raise money for a worthy cause, you’ll have a great time getting your name into the record books.