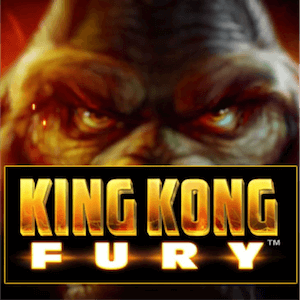 As per usual, NextGen Gaming has packed an overwhelming number of special symbols and bonus features into King Kong Fury. These include stacked and sticky wilds, wild reels, loads of free spins, special re-spins, and randomly triggered bonus features. All of this is packed into an audio-visually engaging Kong-inspired package compatible with all devices.

The theme of NextGen’s King Kong Fury is carried through from the setting of its reels, against the backdrop of Skull Island, to the ancient vines twirled around the reels, and the characters that populate them.

In addition to stylised playing card values, symbols in King Kong Fury include a triceratops, the heroine (who is also the bonus symbol), a T-Rex, a triceratops, a pterodactyl, and various other beasts of Skull Island.

Of course, King Kong himself is the game’s highly valuable wild symbol and will only come up on Reels 2, 3 and 4. The highest paying symbol is the T-Rex, which pays out 100 times the original stake when five land on a single payline.

There are two randomly triggered special features in King Kong Fury: the Kong’s Call Feature and the Lightning Reel Feature.

The King of Skull Island Free Games Feature is triggered by the appearance of bonus heroine symbols or Reels 1 and 5 simultaneously. The player is then awarded four times his or her stake and is allowed to spin the statue reels. This will reveal between three and 10 spins per statue, with free spins multiplied so the player could win up to 100 free spins.

What’s more, the feature can be retriggered an essentially infinite number of times while in play. Also, the Raging Re-Spins Feature may be triggered during the Free Games Feature.

What’s also great about this feature is that the two base game features can also be triggered during free games, enabling players to win up to 12 500 times their original stake on each spin.

In the Raging Re-Spins Feature, a complete wild stack remains in place while the other reels re-spin to improve the odds of winning combos. Additional wild stacks may appear during Raging Re-Spins and, if this happens, players receive more re-spins featuring sticky wilds.

All in all, it looks like King Kong Fury is set to be as big a hit as the film it is based on.