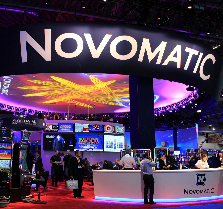 Online gaming software developer Novomatic AG has now revealed record-breaking year on year sales growth of 11.3% in its financial results for the first half of this year (H1 2017).

In its financial report detailing its performance in H1, the company reported burgeoning revenues of €1.22 billion in the six months ended June 30. Novomatic also experienced an increase in its number of self-operated casino websites, up from a previous figure of 1,800 to 2,100 during the period in review.

The notable growth in group sales experienced by the company in H1 was driven primarily by acquisitions made by the firm in the Spanish and German regulated gaming markets, according to Novomatic executives. This included the purchase of the Casino Royal Group in Germany, and also Spanish-based iGaming developer Basque Gaming.

The company’s EBITDA (earnings before interest, taxation, depreciation and amortisation) decreased by 1.6% year on year during the first half of 2017, dropping to €282.5 million. Meanwhile, its operating profits for the six month period also declined by 26.3% over the same period of 2016 to €104.2 million, and net profits also dropped 25.7% to €56.1 million.

In a statement released alongside the figures, Novomatic noted that their lower than average takings could be attributed to ‘higher schedules depreciation and impairment’ caused by various uncontrollable factors.

CEO of Novomatic Harald Neumann also said that the firm’s future-oriented purchases and investments will ensure strong future growth of Novomatic within the global market in the long term.

Neumann continued, noting that the firm’s half-year figures showing record sales have demonstrated that it is on the right track in terms of its international growth strategies. This, he noted, is what the company will be pursuing in the future as well.

Despite a decline in the group’s profits, Novomatic has also said that it is on track to push through with its 53% acquisition of Australian-based gaming firm Ainsworth Gaming Technology. This will follow later this year after Novomatic acquires the necessary approvals, international licensing, and regulatory requirements.