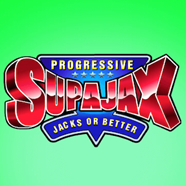 It’s official: the largest SupaJax progressive Jackpot in the history of the popular Microgaming title has just been won. A lucky player, who is yet to be named, has just landed a cool $112,951 in Jackpot winnings from the award-winning online casino NZ Video Poker game.

While the Jackpot pays out as regularly as at least once every six weeks or so, this is by far the biggest win banked from the popular title to date.

Being part of a progressive network of the best online casino NZ games, the Jackpot grows consistently with every hand of cards played across the network. This makes it a firm favourite among fans of games offering potentially life-changing payouts.

About SupaJax By Microgaming

SupaJax is an exciting and action-packed title resembling a standard game of Video Poker developed according to the rules of all hands equal to or better than Jacks constituting a win.

Developed by iGaming titan Microgaming and available at top online casino NZ sites, SupaJax is an awesome video Poker variation of the popular “Jacks or Better” style of game. What does however make Microgaming’s version very different to all the rest, is the presence of a special SupaJax card.

The only other pre-requisite for winning the Jackpot payout is that the game must be played at five game credits for a wager – which is the maximum allowable bet.

The real appeal of SupaJax is that online casino NZ players need not come up with a complex strategy for potentially winning big. While no Wild card is offered, the traditional “Jacks or Better” cards more than make up for this in terms of entertainment value.

When looking for stunning payouts, the SupaJax bonus card is however a must. In fact, the SupaJax card is the so-called “X” factor for making those massive Jackpot wins happen.

Played with a standard deck of 52 cards, and at a maximum bet of €5 per hand, the second-highest result is drawing a Royal Flush. This ranks just under the combination of four Jacks and the bonus card.

Also included for easy money is a special Gamble Bonus option. This enables the player to multiply their winnings by launching the “Double or Nothing” round for additional bonus payouts.

Ready to win? Sign up at the best online casino NZ has to offer NOW!