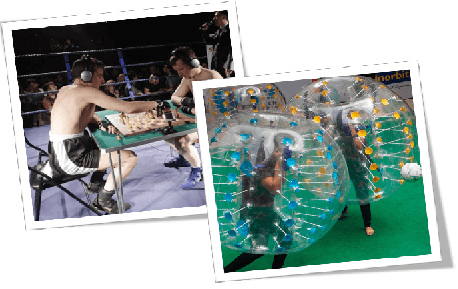 There are plenty of fantastic mainstream sports in the world, but many off-the-wall, lesser-known ones too. At the Rural Games held in New Zealand every year, you can spit olives, shear sheep, race with an egg and spoon, toss gumboots and engage in many other activities that are necessary or just fun parts of rural life. While the games may seem quirky, they are also an important part of preserving rural heritage for future generations.

Many unusual sports are as much about old traditions as the Rural Games are, and others use fun adventures to raise money for worthwhile causes. For example, the annual Cadbury Jaffa Race in Dunedin raises money for The Parents Centre by racing a huge amount of Cadbury’s Jaffa Cakes down a hill as part of the Cadbury Chocolate Carnival. It’s a tasty race for sure!

We thought this would be a great time to look at a few of the other wacky sports the world has to offer, as this crazy event really got us thinking. From the bizarre to the extreme, it seems like there are some really weird activities that are seen as ‘sports’!

As you might guess from the name, Chess Boxing brings 2 beloved pastimes together. Participants alternate between rounds in the Boxing ring, and rounds at the Chessboard. Enki Bilal, an artist and filmmaker from France invented this crazy sport in 1992.

Bilal introduced Chess Boxing in his comic book Froid Équateur, and the first real event was organised in 2003. Dutch artist Iepe Rubingh was the one that made that happen, and it was first considered performance art more than anything else. However, the game is growing in popularity very quickly and is now played competitively in India, Russia, Germany and Great Britain. The game can last up to 11 rounds and is played between 2 competitors, starting with a Chess round of 4 minutes, and then a Boxing round of 2 minutes. It’s weird and it’s wonderful and you never know, this sport may soon become so popular that official wagers could be placed on it at online sportsbooks - stranger things have happened!

Zorbing, or racing down a hill, through water or through other obstacles in a giant plastic, transparent ball is as fun as it sounds. If you race on flat terrain you have more control, though you need to be very fit with strong muscles for any kind of Zorbing.

The sport has a bit of a potted history, but it is believed to have been inspired by Hamster Balls that are used to give the small rodents exercise, and the large transparent balls used in competitions on the Gladiators sports shows of the 1990s. There is little real competition in Zorbing, though it is considered an extreme sport. It’s more about having a great time, and getting that ball to move in interesting ways!

Any Harry Potter fan will be able to tell you all about Quidditch, the official sport of the wizarding world that JK Rowling created. But Quidditch has moved beyond that; people were so taken with the idea that the game is now played in real life.

Muggle (as normal people are called in Harry Potter’s world) Quidditch matches are played with 2 teams of 7 people, as the magical games are. Players have to keep a broom between their legs at all times, in imitation of the ways players fly on brooms in JK Rowling’s game.

The 4 different types of balls in the original game, and the rules that involve chasing an independently flying ball, are faithfully replicated in the Muggle-based version. It is regulated by the International Quidditch Association and has gathered more support and enthusiasm every year since first being played in 2005.

We have literally only scratched the surface of strange sports seen around the world here. You can roll wheels of cheese down hills in Gloucester, carry your wife through water in Finland, or take part in the World Toe Wrestling Competition in Derbyshire. Extreme ironing involves using an ironing board to press clothes while water-skiing, walking a tightrope, or engaging in another dangerous activity. There is an increasing trend to play any kind of sport in the nude, to make things a little more intriguing, not to mention eye-popping!

The list goes on and on, and the unusual activities can strengthen culture and communities, or simply be great fun. You do have to wonder a little about the people who take the competitions very seriously though – what kind of person is growing their facial hair for the biennial World Beard and Moustache Championship, practicing to snorkel through a peat bog in Llanwrtyd Wells, Wales, or training for the World Gurning Contest, where the winner is the person who can pull the ugliest face?