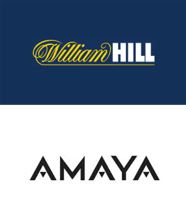 e gambling industry has seen many major software developers and betting forums forming beneficial corporate coalitions. Now, a new merger is set to take place between two veritable giants in the casino software and online gaming industry. Amaya Gaming and William Hill have recently participated in talks about a potential merger, and a press report covering this was soon confirmed by a joint statement released by the two companies.

In this statement, UK sportsbook and gaming provider William Hill stated that it has been searching for ways to diversify the products it offers its players in order to expand its online and international ventures. William Hill and Canadian developer Amaya Gaming have confirmed that talks surrounding a merger have occurred, but both companies also pointed out that talks would not necessarily result in an agreement between them. However, if the deal is closed between the two parties, an all-share merger of equals is expected to ensue.

Amaya has seen its fair share of action this year, starting in February when its CEO at the time, David Baazov, announced his intentions to purchase the company for CA$2.3 billion, which would have taken the developer private.

However, in March, Mr Baazov faced charges of insider trading by Autorité des marchés financiers, Quebec’s regulator of securities. The charges were made in relation to Amaya’s recent multimillion-dollar acquisition of PokerStars and Full Tilt Poker’s holding company, The Rational Group. At this time, Mr Baazov chose to take indefinite paid leave from his position at Amaya, later resigning from his post in August and being succeeded by Mr Rafi Ashkenazi.

Recent reports have also revealed that Isle of Man-based operator GVC Holdings is among the companies with interest in Amaya. However, this interest has not yet been confirmed, as GVC Holdings has been focused on rebranding its recently acquired bwin.party online operator.

Birth of a New Brand

An Amaya and William Hill merger is expected to result in a major new brand entering the online gambling market. William Hill announced that it is looking for ways to diversify its online offerings after releasing a profit warning in March due to unexpectedly low revenues from its online branch. Amaya, too, is looking for a revenue boost after its former CEO’s insider trading charges affected the company’s operations.

William Hill has been involved in several merger talks over the course of the past 2 years, first confirming its interest in 888 Holdings in 2015. This year, the UK-based brand was approached by 888 Holdings and the Rank Group with an acquisition proposal, but rejected both the first and second offers made by the two gambling companies. Only time will tell whether William Hill and Amaya join forces and tackle the market together.