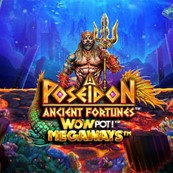 iGaming giant Microgaming has just announced another big win from one of their progressive jackpot titles. And this time round, it’s a massive €3,898,637.78 in prize money won from an online pokies game launched only 4 days before the massive windfall fell for a lucky player at Videoslots Casino.

What makes the massive win even more remarkable is that it’s the second largest win from a progressive jackpot title in the history of online casino games. It also marks the making of a fourth millionaire to date by Microgaming’s WowPot series of progressive jackpot online pokies.

Based in a stunning underwater kingdom, the online pokie features the god of the seas alongside a game area set in the pages of mythology and folklore. The storytelling theme makes for a phenomenal player experience, and it’s no surprise players have been flocking in their drones to play the recently released big title.

Special features include a stunning Free Spins game, up to 117,649 ways to win, and a 6-reel game area boosted by incredible graphics and a truly cinematic feel.

When playing Ancient Fortunes™: Poseidon WowPot Megaways™, bets start out from as little as €0.40 for a spin, meaning anyone can have a chance of aiming for the rich €10,000 top jackpot.

In addition to the jackpots on offer, online pokies enthusiasts can also look forward to potentially nabbing up to an incredible 18,720x the value of their basegame wagers. This means everyone can now look forward to an opportunity to bank life-changing windfalls from a phenomenally entertaining title.

The symbols have been beautifully crafted to reflect the stunning underwater world. These include a seahorse, octopus, dolphins, shells, and a bull’s head. There’s also a Mask of Poseidon and several precious gems – all of which pay out at up to 50x the bet for a combination of five-in-a-row landed on a single payline.

Ready for a jackpot WIN? Sign up at top online casinos NOW!