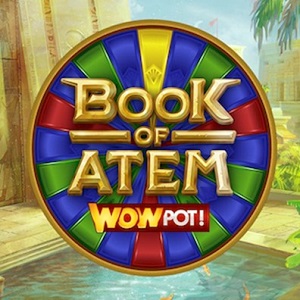 Since the player managed to land the biggest of the jackpots, namely the WowPot Mega jackpot, they banked an incredible €17.5 million as part of their lucky massive score.

Not unlike what is usually the case with progressive jackpots, Microgaming’s WowPot is able to award massive amounts of cash as part of a single win due to several online pokies games being linked together as part of a single jackpot contributor. Every time a player bets on any of the games that form part of the WowPot network, a portion of that bet is added to the overall jackpot kitty.

Currently, a total of six games from part of the WowPot network.

Launched in February this year at top online casinos like Gaming Club, the first of the titles that went live was Alchemy Gaming-developed Wheel of Wishes, followed shortly thereafter by Book of Atem. And it’s exactly this game, Book of Atem, that made the lifechanging win fall for the lucky UK player on April 14. Book of Atem was developed for the iGaming giant by All41Studios.

Other online pokies games added to the WowPot network so far include African Legends and Sisters of Oz, with many more slated to be added soon. Queen of Alexandria and Sherlock & Moriarty are the newest additions recently added to the stunning and fast-growing selection.

Biggest Win Of Them All

It should be mentioned that that ever since WowPot was first launched in Feb, the network has paid out several Major jackpot windfalls – only until very recently, not yet a Mega win. The UK player can proudly boast being the first player ever to have nabbed and banked the seriously big one.

Sisters of Oz and Book of Atem, especially, have been increasingly known to reward lucky players with Major jackpot payouts – in some cases with windfalls as large as more than €1 million at any given time.

Microgaming has been making millionaires out of ordinary players for many years – and their g online pokies games remain of the highest quality in the industry. They are true iGaming pioneers, and owing to the latest windfalls reported, it shows.

Get in on the WINS! Play online pokies NOW.