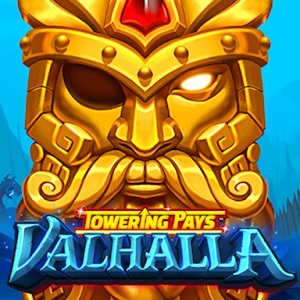 A collaboration between Yggdrasil Gaming and Games Lab resulted in the release of thrilling Norse myth-themed online pokies. Developed on Reelplay, Towering Pays Valhalla will introduce Kiwis to an exciting new mechanic that could put the riches of ancient gods within reach.

The provider and studio are proud of the new release that uses the proprietary mechanic to increase the number of active paylines in play. Let’s see what Yggdrasil and Games Lab had to say about the new game.

Yggdrasil is known for lush graphics and animations; something that’s evident in Towering Pays Valhalla. The immersive artwork shows an eerie setting, knotwork, ancient Norse symbols, modern playing cards, and a few different gods. Given the size of the Norse pantheon, the selection of deities pays homage to Microgaming’s Thunderstruck II, which is a popular option at many of the best online casinos NZ.

Vikings, wolves, rams, and dragons are among the standard symbols. The golden god Tower symbols that trigger the Mega Tower Magic feature include Odin, Thor, a Valkyrie, and Loki.

The gods can transform the standard online pokies symbols into a random symbol, and they use Games Lab’s Towering Pays mechanic to increase the number of active paylines from 15 to 65. The expanded grid remains in place until the Free Spins round, which includes four different features that you have the option of rejecting. Random Multipliers can boost any win that lands on the reels.

Each feature awards 7 Free Spins that start on a 5x3 grid. Loki’s feature offers a Multiplier for every win, while the Valkyrie’s offers Multipliers of up to 10x. The Odin and Thor rounds include Towers that award additional Free Spins.

Towering Pays Valhalla has a 95.75% RTP, and according to the provider, it is highly volatile. This could mean interesting gameplay on computer and mobile.

A New Mechanic For YG Masters

McCarthy added that the new game has an iconic theme, and that the provider was excited to launch what he believes will be a hit with players.

ReelPlay CEO David Johnson said that the game continues the trend begun by Games Lab’s other launches via the provider’s program, one of which is Royal Dragon Infinity Reels.

Does Towering Pays Valhalla sound good to you? Use our trusted reviews and recommendations to find the best online casinos NZ at which to play the game.