Microgaming has established quite the gaming legacy with its Rhyming Reels online and mobile pokies games - having already made a total of 4. It all started with Hearts and Tarts and was followed by this one - Old King Cole. The other two titles in the series include Jack and Jill and Georgie Porgie. The Rhyming Reels Pokies games are notable for their takes on old and well-liked nursery rhymes. Often injected with more adult themes which includes mostly humour and some rather absurd concepts, these casino pokie games have become incredibly popular and will offer New Zealanders lots and lots of chances to walk away with their pockets filled to the brim. Old King Cole is as much a novel pokies game as it is innovative and offers a staggering jackpot prize of 175 000 coins. 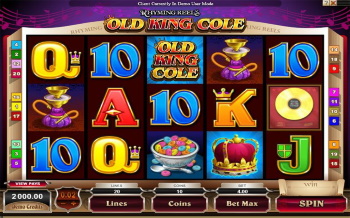 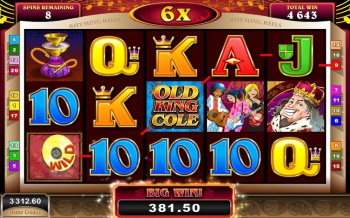 Rhyming Reels Old King Cole brings its amusing theme of rock music to 5 reels and 20 paylines. Powered with a Microgaming pokies engine and encrusted with excellent animations and superb musical sounds, this online pokies game is bound to entertain and provide hours of fun and winning possibilities. What really makes the Old King Cole pokies stand out is just the sheer absurdity of its theme. This game blends the ridiculous with the otherworldly – imagine images of three rocker chicks playing their guitars juxtaposed against an image of a bowl of fruit loops? This is the world of Rhyming Reels Old King Cole online pokies!

Try out other Rhyming Reel Pokies 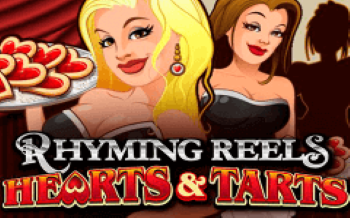 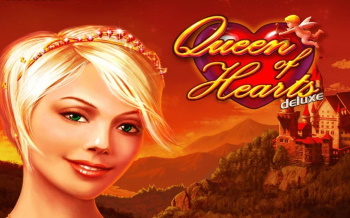 The King of Features

Rhyming Reels Old King Cole is based on the playful old rhyme in which the king called for his pipe in the middle of the night along with his three fiddlers. In this amusing casino game, gone is the pipe, in its place is a hookah, and replacing the fiddlers are three rocking girl guitarists! Wacky features are all over the show in this game including Free Spins, double Wilds, bountiful Multipliers and a Gamble Feature. The graphics are gaudy without being over the top, the soundtrack will get your toes tapping and the reels are filled with symbols that are ready and waiting to line up and make you a potential winner.

Twelve Free Spins are up for grabs along with a 7x Multiplier, not to mention an additional Wild that functions during the Free Spins cycle. The feature can also retrigger to unveil even more chances of getting lucky. Then there’s the Gamble Feature with its quick–decision card game that can increase your bet exponentially. If you want to double your most recent online pokies win you’ll have to correctly guess whether a card is red or black, and if you want to quadruple it, you’ll need to correctly predict the suit. Get it wrong and you’ll return to the base game empty handed and have to start spinning the reels for another chance to win!

All being said, Rhyming Reels Old King Cole can deliver massive wins! This online pokies game offers players something different to the norm and once again Microgaming have delivered in every way. Enjoy it today and get in line to win between 25 000 and 175 000 coins from its bounty!

Still have some questions about the Rhyming Reels Old King Cole pokies? Check out our selection of commonly asked questions below!

Can I play with no deposit?

This could depend on where you choose to play the Rhyming Reels Old King Cole pokies game, because some online casinos will allow you to try a demo version of the game without making any monetary deposits. That being said, if you happen to come across an online casino that offers a no deposit welcome bonus, you will certainly be able to play the game with bonus credits. Bear in mind, of course, that most bonuses come with terms and conditions that need to be met.

Does the Rhyming Reels Old King Cole pokies have a Free Spins feature?

Yes, it does. In order to trigger the Free Spins feature, players will simply need to land a minimum of 3 Scatter symbols anywhere on the reels, with said symbol being represented by an ornate crown. Thereafter, 12 Free Spins will trigger, each one having a Multiplier of 7x attached.

Can I download the Rhyming Reels Old King Cole pokies?

Generally speaking, individual online pokies game cannot be downloaded to one’s device. However, depending on where you play (and on what platform), many online casinos (such as Mummys Gold Casino) offer a downloaded version of their software, such as a mobile app.

What kind of special features does the Rhyming Reels Old King Cole pokies have?

Apart from the aforementioned Free Spins feature, this online pokies game also boasts Wild symbols (which have the ability to take the place of other symbols – except the Scatter), as well as a Gamble feature. This gives players the opportunity to double or quadruple a winning amount, either by correctly guessing the colour or suit of a downward-facing card, respectively.

Can I play for free?

As stated above, many online casinos will let you try the Rhyming Reels Old King Cole pokies for free, so that you can decide for yourself if you would like to play for real money.